When navigating from the Add new milestone button on the Roadmap page the path will be /milestone?action=new and the user should have a good idea that the milestone does not yet exist (although it might be less clear when &name=milestoneX is appended to the path resulting in the milestone name input having text).

In the case that a link is followed to a non-existing milestone the path will be /milestone/milestoneX and it might be less clear that the milestone does not yet exist. We could give a clear indicator in this case: 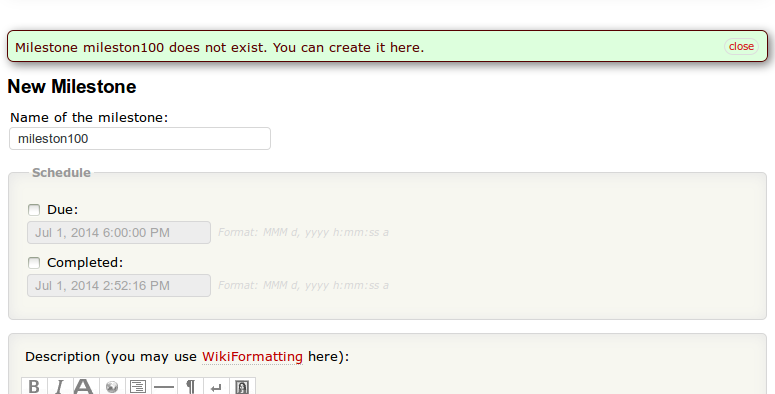 The patch would be simple, and would not add a notice for the case that was first described, when the user follows the Add new milestone link.

by Ryan J Ollos, 8 years ago

One side note: I noticed a while back at a few places in the codebase some multiline strings that always placed the whitespace on the left hand side (like shown in my patch above):

Maybe that is a good practice to add to TracDev/CodingStyle#Strings? Any opinions?

I usually use the latter. It is commonly-used in the codebase.

I have usually used the later as well. That doesn't form an argument for why it's a better style though.

Adding the notice sounds good to me. But I guess that we should add it after checking priviledges. Otherwise, it would be shown in PermissionError page.

Thanks for spotting that issue. Proposed changes in log:rjollos.git:t11663. I'm anticipating that RequestHandlerPermissionsTestCaseBase will be reused in numerous test case modules as we write more unit tests and depend less on functional tests.