We have been looking very closely at Trac and how we would use it in a multi project environment. Our conclusions are a little different to any of the proposals made so far.

We have a large code base. Much of that code is shared among a large number of projects. There is also a complex relationship between projects and milestones. For example, a milestone may change common code and result in several project releases. In other cases there is a one to one milestone/project mapping.

Requests like the one in #1048 and #586 are too simplistic as they only address multiple projects which have nothing in common.

Project and the Repository

We would also like to define which repository paths belong to a project. Trac 0.9 permits a trac instance to work within a single path within a repository thus making multiple Tracs/one repository possible. For multiple projects within a single Trac this would need to be extended as many projects are composed from common parts which are scattered in the repository. Projects should also be linked to a section of the Wiki which would be done using naming conventions - subpages of pages named after the project would belong to that project.

With the above relationship defined query building for the timeline and the roadmap sections become possible, choosing a project the timeline section would show activity for the defined repository paths and the related part of the Wiki. Milestones are also linked to projects so relevent milestone changes would be displayed. Tickets are also linked to a project so only relevent ticket changes would be shown.

Milestones have to be associated with projects (maybe more than one project). Adding a milestone would entail selecting a list of projects affected by that milestone.

Selecting a project would show a timeline based on the repository paths, Wiki location etc. for that project. However we don't believe that this simple relationship between a project and a timeline holds for all projects. So, it should also be possible to use query support added to the timeline page to select repository paths and possibly the Wiki location. These queries should allow the user to select a number of paths into the subversion repository to select repository checkins, a project choice to select tickets and milestones, and a Wiki path (or number of Wiki paths) to select Wiki pages (see Wiki section below). These queries should also be saved so project teams can build reports which are useful for their project. Using these queries most users requirements should be covered. Maybe the queries should be saved by project or milestone - that would be good but not strictly necessary.

In an ideal world there would be a way to link subversion commits to a project. This could be done using the bugtraq string which TortoiseSVN adds to a commit. The bugtraq id links to a ticket which is against a project. Perfect timelines then! The downside of this is that *every* commit *has* to specify a ticket. The Trac code which indexes repository revisions would have to search commit messages for the bugtrac id and link it to the ticket. I guess Trac could then log the commit in the ticket as well.

This is rather simpler than for the timeline. Given that there needs to be a defined relationship between projects and milestones selecting a project should be all that is needed.

No need to change anything here unless multiple repositories were desired, as it is and should remain a view of the entire repository content.

I think that by using the subpages or whatever it is you call pages which have a path (like MyProjectName/…) with the project name at the top level would neatly support multiple project documentation. The query for the timeline would use this path name to select project documentation changes.

Ticket #130 (now #11025) talks about assigning one ticket to multiple projects. I believe that this would be complex and prone to error. It is very difficult to know which projects a piece of common code will affect. It would be very useful to be able to have tickets depend on other tickets (see ticket #31) so that as problems are found on different projects which are caused by common code they can be linked to a single ticket.

Given that the default project (project zero) would give the current Trac single project behaviour if this project were always available for selection then activity on all projects would be visible in one view.

What this does not allow is viewing activity across a subset of the projects.

This is a possible schema. 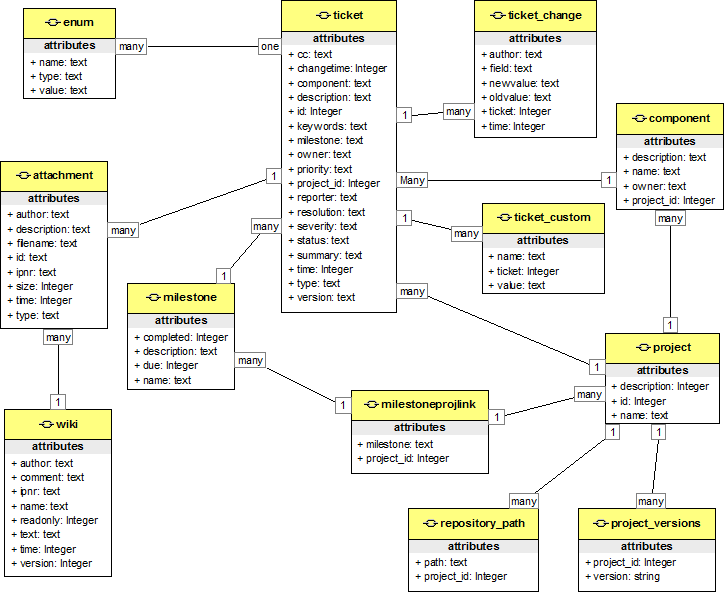