These are observations only on the current development process on Trac. No judgement is implied.

1. Core developers do not or cannot commit a lot of time to the project

Comment: In theory they don't need to, if the community can write patches and test them, then all the core developers need to do is commit to svn.

We need more people to actively care about the project.

Comment: Just look at the history of #2456. People cared, wrote patches, discussed the issue. But in the end nothing changed despite the fact that trac doesnt adhere to its design principles in that area (Users not managed via pluggable Components/Relations) The ticket is 15 years old. There are few comments from team members and virtually no information what problems prevent this to move forward. People got frustrated, wrote competing implementations/plugins or gave up and moved on. I think it's worth analyzing what went wrong here.

A practical course of a computer science student could be to analyze the sources and create an UML model and some UML diagrams of the whole project. This can highly increase the chance that people realize the architecture and are able to extend it with features like e.g. user management. There are some good community versions of UML tools around for free. - falkb

2. Frequently requested features do not get implemented

Big features (e.g. MultipleProjectSupport) first need to have a developer really needing the feature, as it can't be done without some kind of deep involvement.

3. Release cycle is too slow 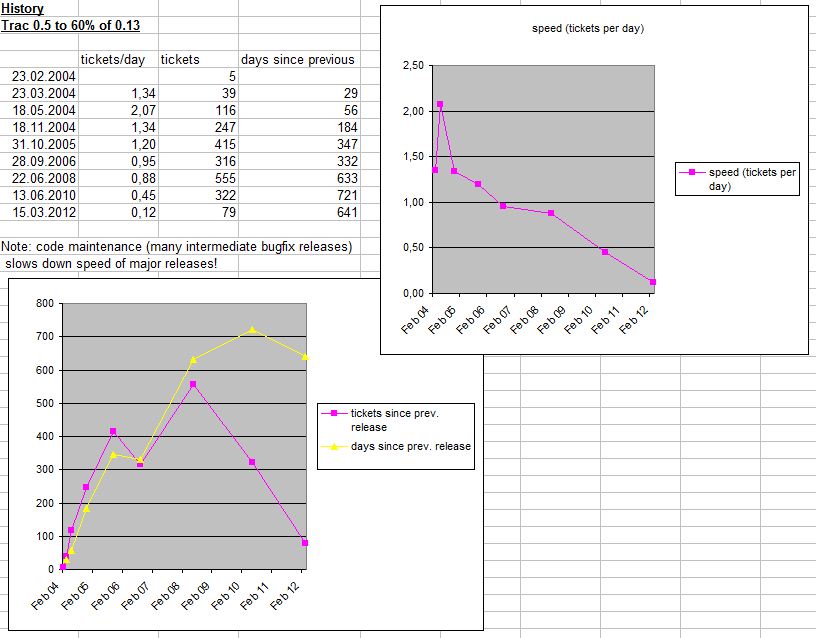 We're actually going to do it, right after 1.0, see ​the whole discussion and the ​decision to go with 1.0 directly and from that point, have regular 1.0.x stable releases and 1.1.x development releases, until the cycle repeats.

4. Zero chance of a plugin getting into the core

There was some attempt to integrate ​AccountManagerPlugin, see also WhatUsersWant, but see also point 2: Frequently requested features do not get implemented.

Note that some plugins will never be integrated or even bundled, due to licensing issues, such as TracMercurial and ​GitPlugin.

Can someone explain the licensing issues here? I used to be a Trac user, and for me, the main reason I don't think of using it now is that my default option is Github. And I wouldn't think of using a SCM that wasn't distributed. For Trac to remain relevant to me, it needs to support Git or Mercurial as natively as it supports SVN. (Ie. not need me to install and manage a plugin).

As I understand it, we can't integrate the TracMercurial plugin because we're using its internal API ("linking to it"). Doing that would force us to distribute Trac as GPL as well, something we don't want to. The git plugin could be different story, as it uses git via its command line interface, so if HvR was to relicense his git plugin under a BSD like license, we might consider it for inclusion (probably below tracopt.versioncontrol.git.).

Actually, the integration of Git support happened recently (see ​gdiscussion:trac-dev:hCwTylvQ_FU and #10594), just like described above.

Same thing could happen with a rewrite of the Mercurial plugin to use its command line interface, but that would be silly, of course.
See #10411 for a reasonable alternative.

Another option to make git and mercurial stand on a more equal footing than svn would be to extract the svn support in a plugin, or at the very least move it to tracopt.versioncontrol.svn_fs.* (svn_fs because having one day a .svn.* backend based on the command line would be an option) — cboos

5. Features that users think should be "core" are not

Since 0.12, there's a new tracopt. package hierarchy, for bundling components that are not enabled by default. This makes it possible to have some room between strictly necessary for almost anyone using Trac (trac.) and optional, must be 3rd party.

6. Many Trac tickets have gone stale and they could probably be closed

The currently 1076 active tickets, often old and with inflated severity, give a false impression of the state of the project. Some very old tickets relevant to points 2 and 5 above could be closed as 'wontfix', perhaps with a note suggesting interested parties could write a patch and reopen the ticket if it is still relevant. Many others could be set to low priority and moved to the 'unscheduled' milestone to help reduce the clutter. Occasional ticket triaging is already underway,.